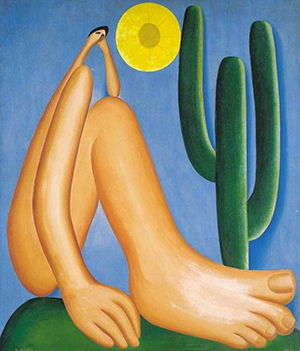 Tarsilinha do Amaral  “You know, the saying ‘Well behaved women never make history’ was true to the core in her case”

A Brazilian woman of her time did not do such things. Move to Paris to become an artist and surround herself with the avant-garde ambience, divorce, travel again and divorce for a second time. Inspire Oswald de Andrade’s (her second husband) Manifiesto Antropofagico (1928), inviting Brazilians to free themselves from the European colonialist influences and create their own culture based on primitive themes. But Tarsila do Amaral (Capivarí, 1886 – São Paulo, 1973) wasn’t a regular woman. She changed the artistic landscape of Latin America and has a 108.52 kilometer crater in Mercury named after her. Isn’t the one of the pioneer of Modernism in Brazil the perfect name for a meteorite depression on the planet that is closest to the sun? Do Amaral has something in common with women of her time (and also with those who came before and after), the fact that moving in a man’s world did not help give her figure the relevance it deserved. Things are still changing and she has a great ally in the battle: her grandniece, who also bears her name, although people call her Tarsilinha.

Can you tell us a little bit about yourself?

I’m Tarsila’s grandniece and have been involved with her artwork all my life, first as an avid admirer of her artistic talent and more recently as the manager of the intellectual property rights related to her legacy and works. Like my father before me, who was Tarsila’s legal advisor, I also have a law degree which has enabled me to deal with issues related to copyrights and authors’ rights. In addition to legal matters I have also been involved in organizing and managing several of Tarsila’s exhibitions around the world both as museologist and curator. I am also a published author, having written books on my aunt Tarsila’s life and artwork. Not directly related to aunt Tarsila, I’m also skilled in equitation, having competed in many national and international events. 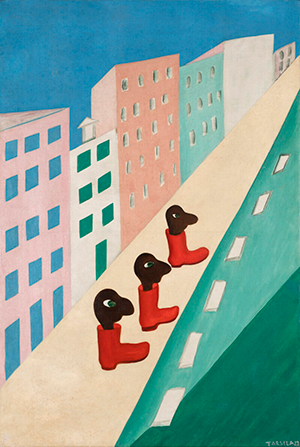 How did you end up managing your great-aunt’s body of work and legacy?

As mentioned before, my father Guilherme, who’s an attorney, used to be aunt Tarsila’s legal advisor and the manager of her business and legal affairs. After my aunt Tarsila passed away, he became the legal representative of copyrights related to her work, alongside other legal matters. About twenty years ago I started gradually taking over that responsibility, and now I am in charge of Tarsila’s copyright matters.

What is your first memory of her?

I have vivid memories of her apartment, of being surrounded by the most extraordinary and peculiar paintings, certainly unconventional, but also bearing on the eccentric and bizarre. As a small child, I had a unique chance to explore a world that had a profound impact on my imagination and formative years. I believe my aunt Tarsila sensed that and always treated me in a specially loving and caring manner. She was a loving and caring person as a rule, but I believe she really enjoyed that special connection with me in particular. I can’t exactly pinpoint a first memory, but maybe the first painting I remember discussing with her was The Street (1929), which she described as being inspired by one of her dreams. She was very interested in Jungian archetypes as well as Freud and his theory of dream interpretation at the time and her line of work appears to corroborate that influence. It is also easy to see how that dream world captivate the mind of an imaginative child like I was.

And the last one?

When aunt Tarsila was at the hospital, a few days before she passed away, she instructed her private nurse Annette to give me the priceless diamond ring she always wore in case she died. I still have that diamond ring, which I regard as a spiritual connection with aunt Tarsila, and as the most significant material possession I have ever owned.

Is The Street (1929) the first painting from Tarsila you remember seeing?

As I mentioned earlier, I remember discussing The Street with her at a very young age, but the truth is, having grown around her artwork all my life, it is almost impossible to pinpoint a first. There were paintings that were of course very remarkable, like Abaporu (1928), which was prominently displayed at aunt Tarsila’s living room, also Operários (1933), which was at the hall leading to her bedroom. But being a kindhearted and generous person, she was always gifting paintings to her family members. My late uncle Sergio used to own the outstanding painting The Lake (1928), on display at his dining room besides some of my favorites from her Anthropophagic phase. My grandmother Liloca and my aunt Helena both owned the exceptional paintings The Farm and Pont Neuf (1923), on display at their living room walls. My own father Guilherme owned several of her paintings, including one of her granddaughter Beatrice, who perished at the young age of fourteen. 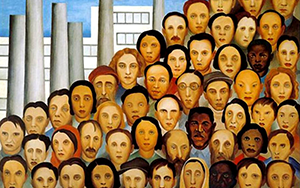 What impression did her work make on you and how has it evolved over the years?

I have always loved aunt Tarsila’s artwork from different perspectives in different stages of my life. I have grown to understand more about art in general and Modern Art in particular after becoming a researcher and author in my early thirties, which required setting aside passion and enthusiasm in favor of a more analytical approach, to write and publish her biography and my other books based on her legacy. That’s when I started forming the bigger picture in my mind, of the significance and impact of her intellect on the Brazilian art scene of the time that only produced artists that would parrot the European art movements and would in no way reflect the soul of Tarsila’s Brazil. She stated in a 1923 letter to her family that she intended to be the painter of her country and that is indeed what she turned out to be, having created the Anthropophagic art movement along with her husband Oswald de Andrade, which advocated “eating and digesting” European art precepts and transforming them into a uniquely Brazilian artform. The impact of her legacy in all forms of Brazilian artistic expression after the creation of the Manifesto Antropofagico and the painting Abaporu back in 1928 can be felt to this day. Her growing popularity nationally and internationally is showing no signs of stopping and it makes me extremely proud to help serve as a catalyst of this trend. 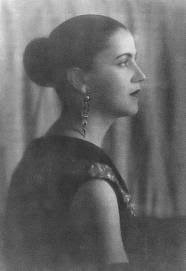 She was truly ahead of her time. Did that fact affect her relationship with her (your) family?

Yes, very much. Tarsila belonged to a very traditional Brazilian family, a “quatrocentona” family dating back to the 1500’s. Most of her very conservative family members didn’t accept her ways, which they considered dissolute and immoral. Nowadays if a husband betrays his wife (which happened to Tarsila more than once), this would give her grounds for a divorce and nobody would blink an eye. Back in the conservative Brazil of the 1920’s a wife would have to live with the situation and never complain, or risk becoming a social outcast, which ended up being the case with Tarsila. But in aunt Tarsila’s situation there were actually three marriages and several affairs, an outright scandal in the eyes of the provincial Brazilian society of the time. The fact that she was a painter was also not well regarded. But like you say “Well behaved women never make history” was true to the core in her case. 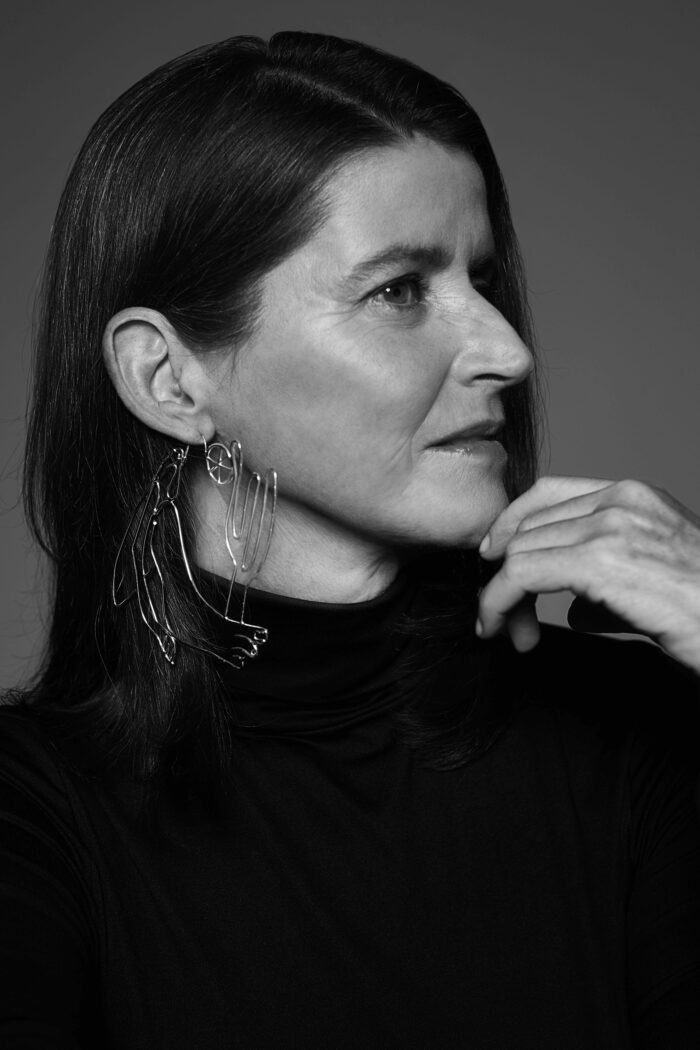 How present has Tarsila’s figure been in your family?

That’s an interesting question. Since she was banned from most of her conservative family circles the relationship with her brother Milton (my grandfather) became all too important in her life. Grandfather Milton and grandmother Liloca would have her over for lunch and after the repas grandfather Milton and aunt Tarsila would spend hours chatting at his office, both of them learning Greek mythology, and complicated words and grammar rules from the Portuguese language. She was also a talented piano player and would sit at the Steinway piano playing Brahms and Chopin even as her health started to deteriorate. My father and mother were her special favorites, I believe. She trusted my father as her legal counsel and my mother Vilma was the one who would take her to every single special event after she became immobilized and in a wheelchair. But that did not stop her from having a loving relationship with my aunts Helena and Thais, as well as all members on our side of the family.

In your opinion, what parts of her life triggered her political awakening?

In the beginning of the 1930’s aunt Tarsila started dating a doctor, who was a communist sympathizer. In 1931 both traveled to the Soviet Union where she had exhibitions of her works in Moscow at the Museum of Occidental Art, and both traveled around the country. Upon her return to Brazil in 1932, she became involved in a revolt against the dictatorship regime in Brazil, which resulted in a prison term for a month. The poverty and plight of the Russian people had a great impact on her and greatly influenced her work, as seen in the painting Operários from 1933. The remainder of her career was focused on social themes. 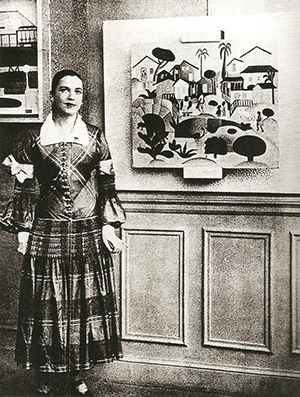 Do you think she received the recognition she deserved in life?

Although she received a lot of recognition through her artistic life, nothing compares with the recognition her artwork has received recently, with solo exhibitions at the Chicago and New York’s MoMa museums in 2018 and with an exhibition at the MASP in Sao Paulo in 2019 that attracted more visitors than the Monet exhibition around the same time (400K+ attenders). During her life she sold several of her paintings to notable museums worldwide and won many awards and accolades, but at this point of time she is regarded as the most significant painter in Brazil. This is portrayed in the worth of her most significant works, appraised in the hundreds of million reais. Recently her painting A Lua (1928) has been sold to the MoMa for an undisclosed amount and is now in a special room alongside paintings of Léger and Picasso, among others. She is also idolized and an icon, considered at the moment as the most popular painter in Brazil. She is starting to get worldwide recognition, something I don’t think she would have ever dreamed would happen at this scale.

Was her aware of her role in Brazilian art and culture scenes?

She was aware of her importance in the Brazilian culture scene but she also knew that as a rule of thumb most significant artists only get true recognition after their death. This became evident when she gifted my father with a painting and then told him to hold on to it since she was convinced that it would appraise a lot in the future. She would never boast or brag about her intellectual superiority to anyone and was always a kind and considerate person and artist. She was keenly aware, however, of the role she played in revolutionizing the Brazilian art landscape and that one day it would likely have an impact in the worth of her work.

What would you say is most important or relevant about Tarsila’s work today?

In 1924, Tarsila stated in a letter to her parents that she wanted to be the painter of her country. She represented in her paintings Brazilian landscapes, the fauna and flora, and typical Brazilian people. But in my opinion, her most significant contribution is the impact she had on the development of Latin American art, and in extending the scope of modernism to influence other Latin American artists in the creation of their own individual expression. 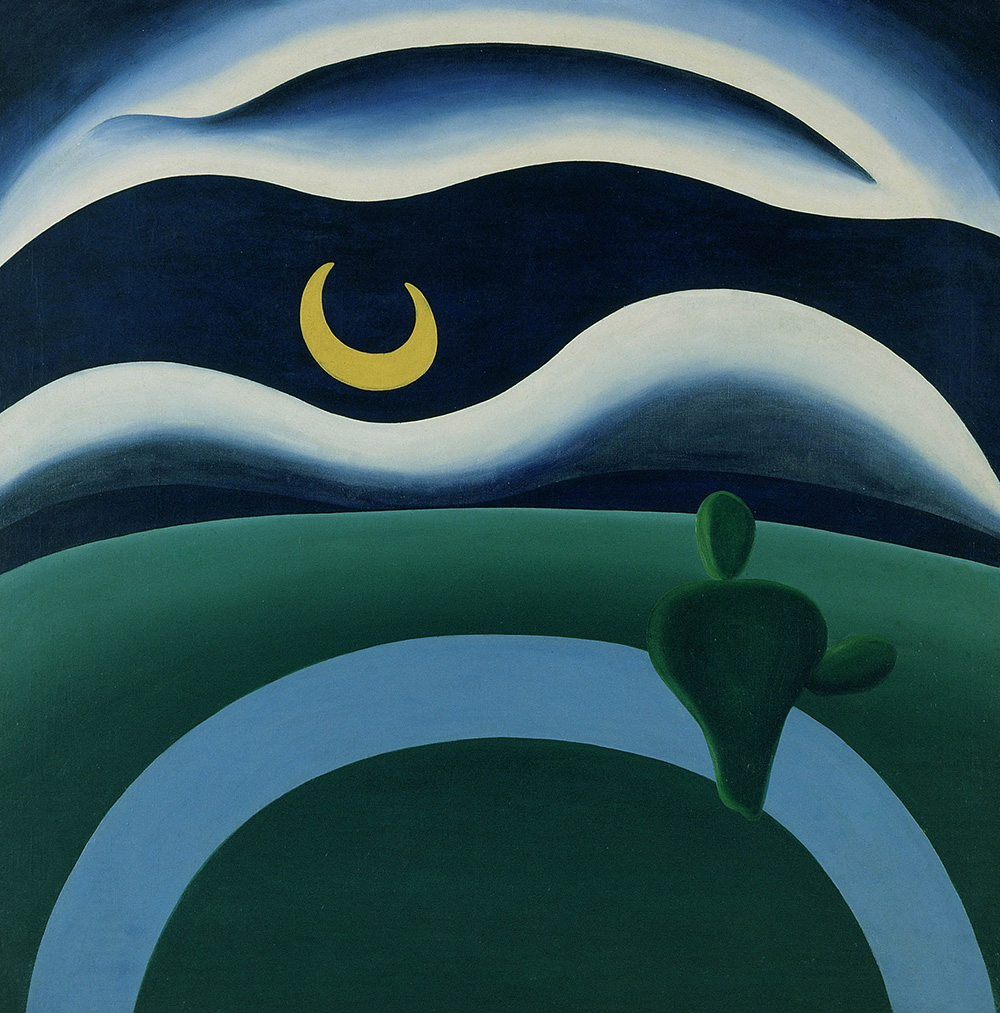